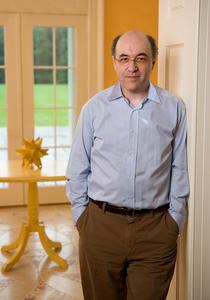 Stephen Wolfram (; born 29 August 1959) is a British-American computer scientist, physicist, and businessman. He is known for his work in computer science, mathematics, and in theoretical physics. In 2012, he was named a fellow of the American Mathematical Society.As a businessman, he is the founder and CEO of the software company Wolfram Research where he worked as chief designer of Mathematica and the Wolfram Alpha answer engine.
Read more or edit on Wikipedia