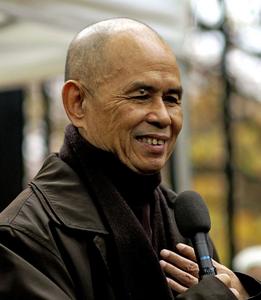 Thích Nhất Hạnh (; Vietnamese: [tʰǐk̟ ɲə̌t hâjŋ̟ˀ] (listen); born as Nguyen Xuan Bao; October 11, 1926 – January 22, 2022) was a Vietnamese Thiền Buddhist monk, peace activist, prolific author, poet, teacher, and founder of the Plum Village Tradition, historically recognized as the main inspiration for engaged Buddhism. Known as the "father of mindfulness", Nhất Hạnh was a major influence on Western practices of Buddhism and mindfulness. In the mid-1960s, Nhất Hạnh co-founded the School of Youth for Social Services and created the Order of Interbeing. He was exiled from Vietnam in 1966 after expressing opposition to the war and refusing to take sides. In 1967, Martin Luther King Jr. nominated him for a Nobel Peace Prize.Nhất Hạnh established dozens of monasteries and practice centers and spent many years living at the Plum Village Monastery, which he founded in 1982 in southwest France near Thénac, travelling internationally to give retreats and talks. Nhất Hạnh promoted deep listening as a nonviolent solution to conflict and sought to raise awareness of the interconnectedness of all elements in nature. He coined the term "engaged Buddhism" in his book Vietnam: Lotus in a Sea of Fire.After a 39-year exile, Nhất Hạnh was permitted to visit Vietnam in 2005. In November 2018, he returned to Vietnam to his "root temple", Từ Hiếu Temple, near Huế, where he lived until his death on January 22, 2022, at the age of 95.
Read more or edit on Wikipedia