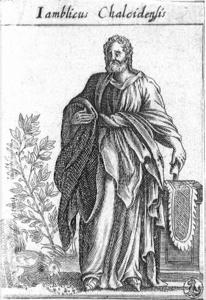 Iamblichus (; Greek: Ἰάμβλιχος Iámblichos; Safaitic: 𐩺𐩣𐩴𐩫 /yamlik/ “[the deity] reigns”; c. AD 245 – c. 325) was a Syrian Neoplatonist philosopher of Arab origin. He determined the direction that would later be taken by Neoplatonic philosophy. He was also the biographer of the Greek mystic, philosopher and mathematician Pythagoras.Aside from Iamblichus' own philosophical contribution, his Protrepticus is of importance for the study of the Sophists, owing to its preservation of approximately ten pages of an otherwise unknown Sophist known as the Anonymus Iamblichi.
Read more or edit on Wikipedia