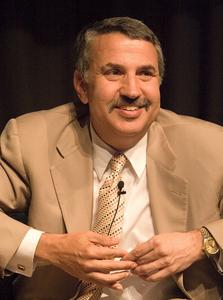 Thomas Loren Friedman (; born July 20, 1953) is an American political commentator and author. He is a three-time Pulitzer Prize winner who is a weekly columnist for The New York Times. He has written extensively on foreign affairs, global trade, the Middle East, globalization, and environmental issues.
Read more or edit on Wikipedia