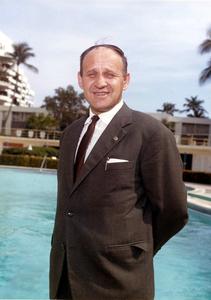 Väinö Linna (pronounced [ˈʋæi̯nø ˈlinːɑ] (listen); 20 December 1920 – 21 April 1992) was a Finnish author. He gained literary fame with his third novel, Tuntematon sotilas (The Unknown Soldier, published in 1954), and consolidated his position with the trilogy Täällä Pohjantähden alla (Under the North Star, published in 1959–1963 and translated into English by Richard Impola). Both have been adapted to a film format on several occasions; The Unknown Soldier was first adapted into a film in 1955 and Under the North Star in 1968 as Here, Beneath the North Star, both directed by Edvin Laine.
Read more or edit on Wikipedia