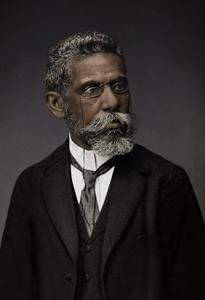 Joaquim Maria Machado de Assis (Portuguese: [ʒwɐˈkĩ mɐˈɾi.ɐ mɐˈʃadu dʒi ɐˈsis]), often known by his surnames as Machado de Assis, Machado, or Bruxo do Cosme Velho (21 June 1839 – 29 September 1908), was a pioneer Brazilian novelist, poet, playwright and short story writer, widely regarded as the greatest writer of Brazilian literature. Nevertheless, Assis did not achieve widespread popularity outside Brazil during his lifetime. In 1897 he founded and became the first President of the Brazilian Academy of Letters. He was multilingual, having taught himself French, English, German and Greek in later life. Born in Morro do Livramento, Rio de Janeiro from a poor family, he was the grandson of freed slaves in a country where slavery would not be fully abolished until 49 years later. He barely studied in public schools and never attended university. With only his own intellect to rely on, and largely self-taught, he struggled to rise socially. To do so, he took several public positions, passing through the Ministry of Agriculture, Trade and Public Works, and achieving early fame in newspapers where he published his first poetry and chronicles. Machado's work shaped the realism movement in Brazil. He became known for his wit and his eye-opening critiques of society. Generally considered to be Machado's greatest works are Dom Casmurro (1899), Memórias Póstumas de Brás Cubas ("Posthumous Memoirs of Brás Cubas", also translated as Epitaph of a Small Winner) and Quincas Borba (also known in English as Philosopher or Dog?). In 1893 he published "A Missa do Galo" ("Midnight Mass"), often considered to be the greatest short story in Brazilian literature. American literary critic Harold Bloom's included Machado de Assis in his list of 100 geniuses of literature. Bloom considers him the greatest black writer in Western literature.
Read more or edit on Wikipedia