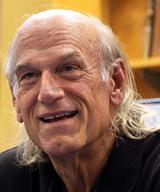 Jesse Ventura (born James George Janos; July 15, 1951) is an American politician, actor, and retired professional wrestler. After achieving fame in the World Wrestling Federation (WWF), he served as the 38th governor of Minnesota from 1999 to 2003. He was elected governor with the Reform Party and is the party's only candidate to win a major government office. Ventura was a member of the U.S. Navy Underwater Demolition Team during the Vietnam War. After leaving the military, he embarked on a professional wrestling career from 1975 to 1986, taking the ring name "Jesse 'The Body' Ventura". He had a lengthy tenure in the WWF/WWE as a performer and color commentator and was inducted into the WWE Hall of Fame class of 2004. In addition to wrestling, Ventura pursued an acting career, appearing in films such as Predator and The Running Man (both released in 1987 and starring fellow muscleman-turned-actor-turned-governor Arnold Schwarzenegger). Ventura entered politics in 1991 when he was elected mayor of Brooklyn Park, Minnesota, a position he held until 1995. He was the Reform Party candidate in the 1998 Minnesota gubernatorial election, running a low-budget campaign centered on grassroots events and unusual ads that urged citizens not to "vote for politics as usual". In a major upset, Ventura defeated both the Democratic and Republican nominees. Amid internal fights for control over the party, Ventura left the Reform Party a year after taking office and served the remainder of his term as governor as a member of the Independence Party of Minnesota. Since holding public office, Ventura has called himself a "statesman" rather than a politician.As governor, Ventura oversaw reforms of Minnesota's property tax as well as the state's first sales tax rebate. Other initiatives he took included construction of the METRO Blue Line light rail in the Minneapolis–Saint Paul metropolitan area and income tax cuts. Ventura did not run for reelection. After leaving office in 2003, he became a visiting fellow at Harvard University's John F. Kennedy School of Government. He has since hosted a number of political television shows on RT America and Ora TV, and written several books. Ventura has been a prominent figure in third party politics, having repeatedly floated the idea of running for President of the United States as an independent candidate.In late April 2020, Ventura endorsed the Green Party in the 2020 presidential election and showed interest in running for its nomination. He officially joined the Green Party of Minnesota on May 2. On May 7, he confirmed he would not run. The Alaskan division of the Green Party nominated Ventura without his involvement, causing the national party to disown it for abandoning its nominee, Howie Hawkins. Source: Wikipedia (en)