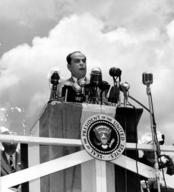 Rómulo Ángel del Monte Carmelo Gallegos Freire (2 August 1884 – 5 April 1969) was a Venezuelan novelist and politician. For a period of nine months during 1948, he governed as the first freely elected president in Venezuela's history. He was removed from power by military officers in the 1948 Venezuelan coup.Rómulo Gallegos is considered the most relevant Venezuelan novelist of the 20th century, and a prominent figure in Latin American literature. Source: Wikipedia (en)