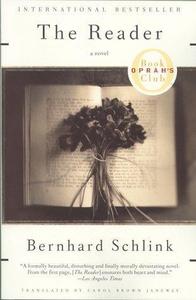 The Reader (German: Der Vorleser) is a novel by German law professor and judge Bernhard Schlink, published in Germany in 1995 and in the United States in 1997. The story is a parable, dealing with the difficulties post-war German generations have had comprehending the Holocaust; Ruth Franklin writes that it was aimed specifically at the generation Bertolt Brecht called the Nachgeborenen, those who came after. Like other novels in the genre of Vergangenheitsbewältigung, the struggle to come to terms with the past, The Reader explores how the post-war generations should approach the generation that took part in, or witnessed, the atrocities. These are the questions at the heart of Holocaust literature in the late 20th and early 21st century, as the victims and witnesses die and living memory fades.Schlink's book was well received in his native country and elsewhere, winning several awards. Der Spiegel wrote that it was one of the greatest triumphs of German literature since Günter Grass's The Tin Drum. It sold 500,000 copies in Germany and was listed 14th of the 100 favorite books of German readers in a television poll in 2007. It won the German Hans Fallada Prize in 1998, and became the first German book to top The New York Times bestselling books list. It has been translated into 45 different languages and has been included in the curricula of college-level courses in Holocaust literature and German language and German literature. It was adapted by David Hare into the 2008 film of the same name directed by Stephen Daldry; the film was nominated for five Academy Awards, with Kate Winslet winning for her portrayal of Hanna Schmitz.
Read more or edit on Wikipedia