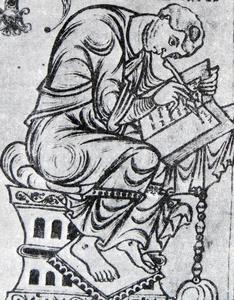 Paulus Orosius (; born c. 375, died after 418 AD), less often Paul Orosius in English, was a Roman priest, historian and theologian, and a student of Augustine of Hippo. It is possible that he was born in Bracara Augusta (now Braga, Portugal), then capital of the Roman province of Gallaecia, which would have been the capital of the Kingdom of the Suebi by his death. Although there are some questions regarding his biography, such as his exact date of birth, it is known that he was a person of some prestige from a cultural point of view, as he had contact with the greatest figures of his time such as Augustine of Hippo and Jerome of Stridon. In order to meet with them Orosius travelled to cities on the southern coast of the Mediterranean Sea, such as Hippo Regius, Alexandria, and Jerusalem. These journeys defined his life and intellectual output. Orosius did not just discuss theological matters with Saint Augustine; he also collaborated with him on the book City of God. In addition, in 415 he was chosen to travel to Palestine in order to exchange information with other intellectuals. He was also able to participate in a Church Council meeting in Jerusalem on the same trip and he was entrusted with transporting the relics of Saint Stephen. The date of his death is also unclear, although it appears to have not been earlier than 418, when he finished one of his books, or later than 423.He wrote a total of three books, of which his most important is his Seven Books of History Against the Pagans (Latin: Historiarum Adversum Paganos Libri VII), considered to be one of the books with the greatest impact on historiography during the period between antiquity and the Middle Ages, as well as being one of the most important Hispanic books of all time. Part of its importance comes from the fact that the author shows his historiographical methodology. The book is a historical narration focusing on the pagan peoples from the earliest time up until the time Orosius was alive.Orosius was a highly influential figure both for the dissemination of information (History Against the Pagans was one of the main sources of information regarding Antiquity that was used up to the Renaissance) and for rationalising the study of history (his methodology greatly influenced later historians).
Read more or edit on Wikipedia 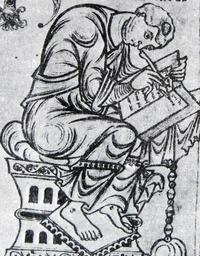