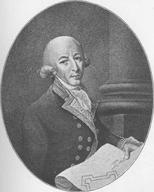 Admiral Arthur Phillip (11 October 1738 – 31 August 1814) was a British Royal Navy officer who served as the first governor of the Colony of New South Wales. Phillip was educated at Greenwich Hospital School from June 1751 until December 1753. He then became an apprentice on the whaling ship Fortune. With the outbreak of the Seven Years' War against France, Phillip enlisted in the Royal Navy as captain's servant to Michael Everitt aboard HMS Buckingham. With Everitt, Phillip also served on HMS Union and HMS Stirling Castle. Phillip was promoted to lieutenant on 7 June 1761, before being put on half-pay at the end of hostilities on 25 April 1763. Seconded to the Portuguese Navy in 1774, he served in the war against Spain. Returning to Royal Navy service in 1778, in 1782 Phillip, in command of HMS Europa, was to capture Spanish colonies in South America, but an armistice was concluded before he reached his destination. In 1784, Phillip was employed by Home Office Under Secretary Evan Nepean, to survey French defences in Europe. In 1786 Phillip was appointed by Lord Sydney as the commander of the First Fleet, a fleet of 11 ships whose crew were to establish a penal colony and a settlement at Botany Bay, New South Wales. On arriving at Botany Bay, Phillip found the site unsuitable and searched for a more habitable site for a settlement, which he found in Port Jackson – the site of Sydney, Australia, today. Phillip was a far-sighted governor who soon realised that New South Wales would need a civil administration and a system for emancipating convicts. However, his plan to bring skilled tradesmen on the First Fleet's voyage had been rejected. Consequently, he faced immense problems with labour, discipline, and supply. Phillip wanted harmonious relations with the local indigenous peoples, in the belief that everyone in the colony was a British citizen and was protected by the law as such, therefore the indigenous peoples had the same rights as everyone under Phillip's command. Eventually, cultural differences between the two groups of people led to conflict. The arrival of more convicts with the Second and Third Fleets placed new pressures on scarce local resources. By the time Phillip sailed home in December 1792, the colony was taking shape, with official land grants, systematic farming, and a water supply in place. On 11 December 1792, Phillip left the colony to return to Britain to receive medical treatment for kidney stones. He had planned to return to Australia, but medical advisors recommended he resign from the governorship. His health recovered and he returned to active duty in the Navy in 1796, holding a number of commands in home waters before being put in command of the Hampshire Sea Fencibles. He eventually retired from active naval service in 1805. He spent his final years of retirement in Bath, Somerset, before his death on 31 August 1814. As the first Governor of New South Wales, a number of places in Australia are named after him, including Port Phillip, Phillip Island, Phillip Street in Sydney, the suburb of Phillip in Canberra and the Governor Phillip Tower building in Sydney, as well as many streets, parks, and schools. Source: Wikipedia (en)