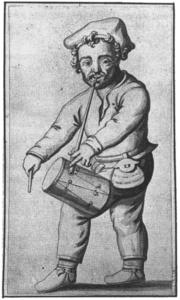 British actor and clown of the Elizabethan era

Richard Tarlton (died September 1588), was an English actor of the Elizabethan era. He was the most famous clown of his era, known for his extempore comic doggerel verse, which came to be known as "Tarltons". He helped to turn Elizabethan theatre into a form of mass entertainment paving the way for the Shakespearean stage. After his death many witticisms and pranks were attributed to him and were published as Tarlton's Jests. Tarlton was also an accomplished dancer, musician and fencer. He was also a writer, authoring a number of jigs, pamphlets and at least one full-length play.
Read more or edit on Wikipedia