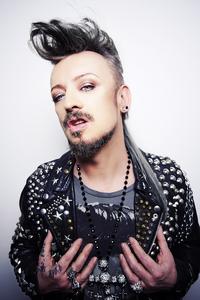 George Alan O'Dowd (born 14 June 1961), known professionally as Boy George, is an English singer, songwriter, DJ, fashion designer, photographer and record producer. He is the lead singer of the pop band Culture Club. At the height of the band's fame, during the 1980s, they recorded global hit songs such as "Karma Chameleon", "Do You Really Want to Hurt Me" and "Time (Clock of the Heart)". George is known for his soulful voice and his androgynous appearance. He was part of the British New Romantic movement which emerged in the late 1970s to the early 1980s. His music is often classified as blue-eyed soul, which is influenced by rhythm and blues and reggae. His look and style of fashion was greatly inspired by glam rock pioneers David Bowie and Marc Bolan. He was the lead singer of Jesus Loves You between 1989 and 1992. In 2015, Boy George received an Ivor Novello Award from the British Academy of Songwriters, Composers and Authors for Outstanding Services to British Music. In 2002, he was voted 46th in a BBC poll of the 100 Greatest Britons.
Read more or edit on Wikipedia