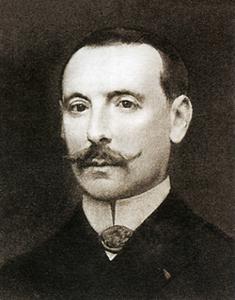 Henri Béraldi (6 February 1849, Paris – 31 March 1931, Paris) was a French bibliophile, publisher and author of books on the Pyrenees and on French printmakers of the 19th century. Henri Béraldi was the son of Pierre Louis Béraldi, a senator in the Third Republic between 1876 and 1885. Henri married Mathilde Gavet in 1880. They had five children, including Pierre and André Béraldi, both chevaliers of the Légion d'honneur, and Jacques Béraldi, an officier in the same order. The collection of Henri Béraldi consisted mainly of French illustrated books and books with special bindings, and was considered one of the four most important collections of its type, together with the collections of Ferdinand James von Rothschild, Louis Roederer and Robert Schuhmann.He enjoyed holidays in the spa town of Bagnères-de-Luchon in the Pyrenees, and became a noted writer on the range. Pic Béraldi, also known as the Eriste N or the Bagüeñola Norte, is a 3,205m-high peak in the Spanish Province of Huesca named after him.Béraldi was the president of the Société des amis des livres. from 1901 to 1931, and an officier of the Légion d'honneur.After his death in 1931, his collection (minus a selection of books on the Pyrenees, which was donated to the library of Toulouse) was sold in a five-day auction in 1934–35.
Read more or edit on Wikipedia

book by Henri Beraldi about mountaineering in Pyrénées