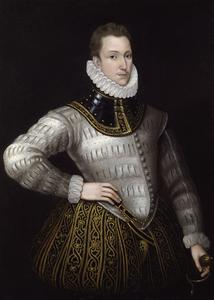 Sir Philip Sidney (30 November 1554 – 17 October 1586) was an English poet, courtier, scholar and soldier who is remembered as one of the most prominent figures of the Elizabethan age. His works include Astrophel and Stella, The Defence of Poesy (also known as The Defence of Poetry or An Apology for Poetry) and The Countess of Pembroke's Arcadia.
Read more or edit on Wikipedia