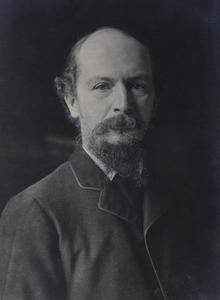 Algernon Charles Swinburne (5 April 1837 – 10 April 1909) was an English poet, playwright, novelist, and critic. He wrote several novels and collections of poetry such as Poems and Ballads, and contributed to the famous Eleventh Edition of the Encyclopædia Britannica. Swinburne wrote about many taboo topics, such as lesbianism, cannibalism, sado-masochism, and anti-theism. His poems have many common motifs, such as the ocean, time, and death. Several historical people are featured in his poems, such as Sappho ("Sapphics"), Anactoria ("Anactoria"), and Catullus ("To Catullus").
Read more or edit on Wikipedia