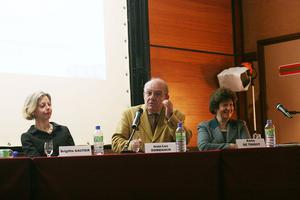 Jean-Luc Domenach (born 11 August 1945 in Hauterives) is a French historian, sinologist and political scientist. He is a senior research fellow at Fondation nationale des sciences politiques. His research focuses on chinese and asian politics. From 1985 to 1994, Jean-Luc Domenach was the director of the Centre d'études et de recherches internationales (CERI). From 1995 to 2000, he was scientific director of the Fondation Nationale des Sciences Politiques. From 2002, he was based in Beijing, as head of French-Chinese doctoral workshop of Tsinghua University, which later morphed into the Centre Franco-Chinois. After 2007, he taught at the Paris Institute of Political Studies.
Read more or edit on Wikipedia