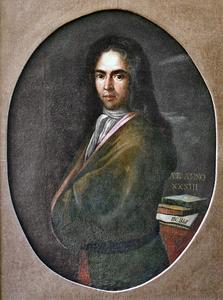 poet from the Republic of Ragusa

Dživo Franov Gundulić (Italian: Gianfrancesco Gondola; 8 January 1589 – 8 December 1638), better known today as Ivan Gundulić, was the most prominent Baroque poet from the Republic of Ragusa (now in Croatia). He is regarded as the Croatian national poet. His work embodies central characteristics of Roman Catholic Counter-Reformation: religious fervor, insistence on "vanity of this world" and zeal in opposition to "infidels". Gundulić's major works—the epic poem Osman, the pastoral play Dubravka, and the religious poem Tears of the Prodigal Son (based on the Parable of the Prodigal Son) are examples of Baroque stylistic richness and, frequently, rhetorical excess.
Read more or edit on Wikipedia