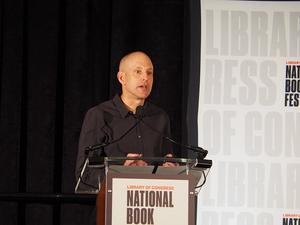 Jim Ottaviani is an American writer who is the author of several comic books about the history of science. His best-known work, Two-Fisted Science: Stories About Scientists, features biographical stories about Galileo Galilei, Isaac Newton, Niels Bohr, and several stories about physicist Richard Feynman. He is also a librarian and has worked as a nuclear engineer.
Read more or edit on Wikipedia