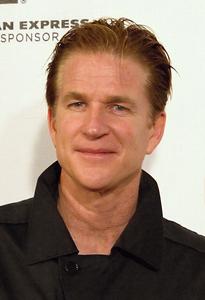 Matthew Avery Modine (born March 22, 1959) is an American actor, activist and filmmaker, who rose to prominence through his role as United States Marine Corps Private Joker in Full Metal Jacket. His other film roles include the title character in Birdy, the high school wrestler Louden Swain in Vision Quest, FBI agent Mike Downey in Married to the Mob, Joe Slovak in Gross Anatomy, William Shaw in Cutthroat Island, Drake Goodman in Pacific Heights and Dr. Ralph Wyman in Short Cuts. On television, Modine portrayed the villainous Dr. Martin Brenner in Stranger Things, the oversexed Sullivan Groff on Weeds, Dr. Don Francis in And the Band Played On and Ivan Turing in Proof. Modine has been nominated twice for a Golden Globe Award for Best Actor in a Miniseries or Motion Picture Made for Television for his work in And the Band Played On and What the Deaf Man Heard and received a special Golden Globe for him and the rest of the ensemble in Short Cuts. He was also nominated for a Primetime Emmy Award for Outstanding Lead Actor in a Miniseries or a Special for And the Band Played On.
Read more or edit on Wikipedia