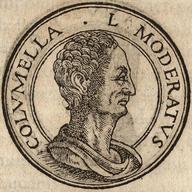 Lucius Junius Moderatus Columella (; Arabic: Yunius,: 12  4 – c. 70 AD) was a prominent writer on agriculture in the Roman Empire.His De re rustica in twelve volumes has been completely preserved and forms an important source on Roman agriculture, together with the works of Cato the Elder and Varro, both of which he occasionally cites. A smaller book on trees, De arboribus, is usually attributed to him. In 1794 the Spanish botanists Jose Antonio Pavón y Jimenez and Hipólito Ruiz López named a genus of Peruvian asterid Columellia in his honour. Source: Wikipedia (en)