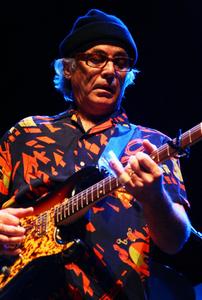 Ryland Peter "Ry" Cooder (born March 15, 1947) is an American musician, songwriter, film score composer, record producer, and writer. He is a multi-instrumentalist but is best known for his slide guitar work, his interest in traditional music, and his collaborations with traditional musicians from many countries. Cooder's solo work draws upon many genres. He has played with John Lee Hooker, Captain Beefheart, Gordon Lightfoot, Ali Farka Touré, Eric Clapton, The Rolling Stones, Van Morrison, Neil Young, Randy Newman, Linda Ronstadt, Vishwa Mohan Bhatt, David Lindley, The Chieftains, The Doobie Brothers, and Carla Olson and The Textones (on record and film). He formed the band Little Village, and produced the album Buena Vista Social Club (1997), which became a worldwide hit; Wim Wenders directed the documentary film of the same name (1999), which was nominated for an Academy Award in 2000. Cooder was ranked at No. 8 on Rolling Stone magazine's 2003 list of "The 100 Greatest Guitarists of All Time", while a 2010 list by Gibson Guitar Corporation placed him at No. 32. In 2011, he published a collection of short stories called Los Angeles Stories.
Read more or edit on Wikipedia