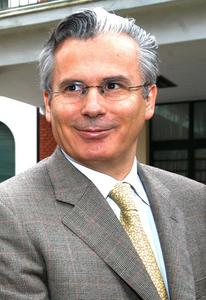 Baltasar Garzón Real (Spanish pronunciation: [baltaˈsaɾ ɣaɾˈθon]; born 26 October 1955) is a former Spanish judge. Garzón formerly served on Spain's central criminal court, the Audiencia Nacional, and was the examining magistrate of the Juzgado Central de Instrucción No. 5, which investigates the most important criminal cases in Spain, including terrorism, organised crime, and money laundering. In 2011, he was suspended from judicial activity and in 2012 he was convicted of illegal wiretapping and disbarred for a period of 11 years. Garzón legally assisted Julian Assange. On 24 March 2020, it was announced that Garzón was diagnosed with COVID-19 and hospitalized during the COVID-19 pandemic in Spain.
Read more or edit on Wikipedia