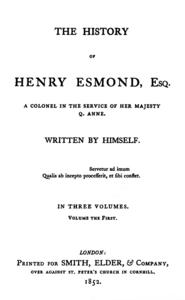 The History of Henry Esmond

The History of Henry Esmond is a historical novel by William Makepeace Thackeray, originally published in 1852. The book tells the story of the early life of Henry Esmond, a colonel in the service of Queen Anne of England. A typical example of Victorian historical novels, Thackeray's work of historical fiction tells its tale against the backdrop of late 17th- and early 18th-century England – specifically, major events surrounding the English Restoration — and utilises characters both real (but dramatised) and imagined. It weaves its central character into a number of events such as the Glorious Revolution, the War of the Spanish Succession, the Hamilton–Mohun Duel and the Hanoverian Succession.
Read more or edit on Wikipedia

original title: The History of Henry Esmond, Esq., A Colonel in the Service of Her Majesty Queen Anne
language: English
date of publication: 1852
genre: autobiographical novel
followed by: The Virginians