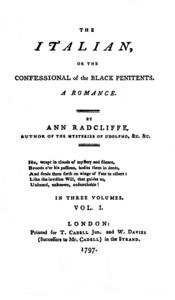 The Italian, or the Confessional of the Black Penitents (1797) is a Gothic novel written by the English author Ann Radcliffe. It is the last book Radcliffe published during her lifetime (although she would go on to write the novel Gaston de Blondeville, it was only published posthumously in 1826). The Italian has a dark, mysterious, and somber tone which fixates on the themes of love, devotion, and persecution during the time period of Holy Inquisition. The novel deals with issues prevalent at the time of the French Revolution, such as religion, aristocracy, and nationality. Radcliffe's renowned use of veiled imagery is considered to have reached its height of sophistication and complexity in The Italian; concealment and disguise are central motifs of the novel. In line with late 18th-century sensibility and its parallel fetishisation of the sublime and the sentimentally pastoral, the heightened emotional states of Radcliffe's characters are often reflected through the pathetic fallacy. The novel is noted for its extremely effective antagonist, Father Schedoni, who influenced the Byronic characters of Victorian literature.
Read more or edit on Wikipedia