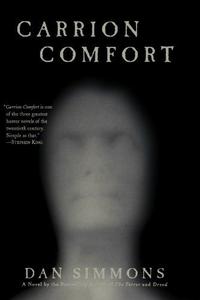 Carrion Comfort is a science fiction/horror novel by American writer Dan Simmons, published in 1989 in hard cover by Dark Harvest and in 1990 in paperback by Warner Books. It won the Bram Stoker Award, the Locus Poll Award for Best Horror Novel, and the August Derleth Award for Best Novel. It is based on a novella of the same title, published in 1983 in the magazine Omni. The first half of the novella makes up chapter 1 of the novel, while the second half forms chapter 3.The novel portrays a tiny fraction of humanity that has immense psychic powers, which they refer to as "The Ability". These powers can be used to completely control people from a distance to commit any physical action, including murder. This Ability has been used throughout history to have a direct or indirect influence, via the perceived charisma of world leaders or the actions of more covert individuals, on everything from individual senseless murders to the Holocaust. Across multiple timelines, the novel mostly follows two groups of amoral people in 1980, some with aspirations of world domination, as their clashing involves a group of investigators. These non-psychic investigators follow a series of bizarre murders to the conclusion that a cabal of powerful psychics must be stopped.
Read more or edit on Wikipedia