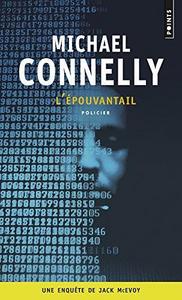 The Scarecrow is a 2009 novel written by American author Michael Connelly. It was Connelly's 21st book (20th novel) and the second featuring as the main character Jack McEvoy, a reporter now living in Los Angeles, and FBI agent Rachel Walling. As a result, the novel is a sequel to the events in Connelly's 1996 book The Poet, although another Connelly novel, The Narrows, was published in 2004 as the "official" sequel to The Poet. The book was published in the UK and Ireland on May 12, 2009, and in the US and Canada on May 26, 2009. Although McEvoy has made two subsequent appearances in Connelly's Harry Bosch novels (A Darkness More Than Night and The Brass Verdict), and Walling has appeared in three such novels (The Narrows, Echo Park and The Overlook), this was their first appearance together since The Poet.
Read more or edit on Wikipedia