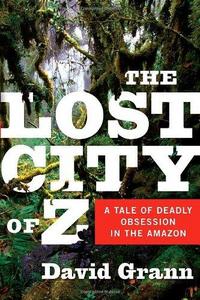 The Lost City of Z

The Lost City of Z: A Tale of Deadly Obsession in the Amazon is the debut non-fiction book by American author David Grann. The book was published in 2009 and recounts the activities of the British explorer Percy Fawcett who, in 1925, disappeared with his son in the Amazon while looking for an ancient lost city. For decades explorers and scientists have tried to find evidence of his party and of the "Lost City of Z". Grann also recounts his own journey into the Amazon, by which he discovered new evidence about how Fawcett may have died. He learned that Fawcett may have come upon "Z" without knowing it. The book claims as many as 100 people may have died or disappeared (and are presumed dead) searching for Fawcett over the years; however, the more historically accurate toll, according to John Hemming, is one. The Lost City of Z was the basis of a 2016 feature film of the same name, written and directed by James Gray.
Read more or edit on Wikipedia