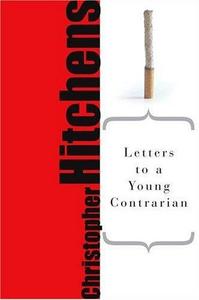 Letters to a Young Contrarian

Letters to a Young Contrarian is Christopher Hitchens' contribution, released in 2001, to the Art of Mentoring series published by Basic Books. Inspired by his students at The New School in New York City and "a challenge that was made to me in the early months of the year 2000," the book is addressed directly to the reader—"My Dear X" —as a series of missives exploring a range of "contrarian," radical, independent or "dissident" positions, and advocating the attitudes best suited to cultivating and to holding them. Hitchens touches on his own ideological development, the nature of debate and humour, the ways in which language is slyly manipulated in apology for offensive and ridiculous positions, and how to see through this and recognise it whenever it arises in oneself. Throughout, Hitchens makes reference to those dissenters who have inspired him over the years, including Émile Zola, Rosa Parks, George Orwell, Fulke Greville, 1st Baron Brooke, and Václav Havel. The book also contains some of the critiques of religion and religious belief which Hitchens would later develop in his polemic God Is Not Great: How Religion Poisons Everything.
Read more or edit on Wikipedia