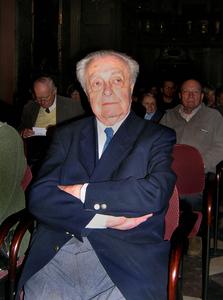 Ilja Hurník (25 November 1922 – 7 September 2013) was a Czech composer and essayist.Hurnik was born in Poruba, now part of Ostrava. He entered the Prague Conservatory, then went on to the Prague Academy of Arts, where he studied with Ilona Štěpánová-Kurzová, daughter of Vilém Kurz. His 1952 Sonata da camera, for flute, oboe, cello and harpsichord, has been recorded on Cedille Records.A 2008 Supraphon CD (SU 3944-2) contains two of Hurník's instrumental compositions: the colorful ballet music Ondráš, written in 1951, and his Four Seasons Chamber Suite, written in 1952. Both are performed by the Czech Philharmonic Orchestra led by Karel Ančerl. He is father of Lukáš Hurník, brother-in-law of Petr Eben and uncle of Marek Eben. Ilja Hurník died in Prague on 7 September 2013 at the age of 90.
Read more or edit on Wikipedia