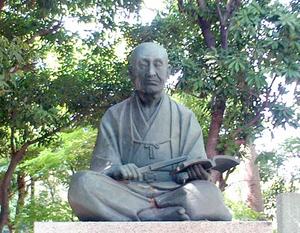 Chikamatsu Monzaemon (近松 門左衛門, real name Sugimori Nobumori, 杉森 信盛, 1653 – 6 January 1725) was a Japanese dramatist of jōruri, the form of puppet theater that later came to be known as bunraku, and the live-actor drama, kabuki. The Encyclopædia Britannica has written that he is "widely regarded as the greatest Japanese dramatist". His most famous plays deal with double-suicides of honor bound lovers. Of his puppet plays, around 70 are jidaimono (historical romances) and 24 are sewamono (domestic tragedies). The domestic plays are today considered the core of his artistic achievement, particularly works such as The Courier for Hell (1711) and The Love Suicides at Amijima (1721). His histories are viewed less positively, though The Battles of Coxinga (1715) remains praised.
Read more or edit on Wikipedia