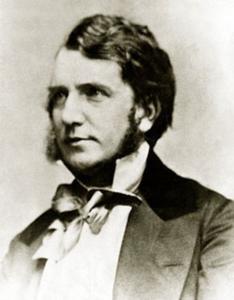 Joseph Thomas Sheridan Le Fanu (; 28 August 1814 – 7 February 1873) was an Irish writer of Gothic tales, mystery novels, and horror fiction. He was a leading ghost story writer of his time, central to the development of the genre in the Victorian era. M. R. James described Le Fanu as "absolutely in the first rank as a writer of ghost stories". Three of his best-known works are the locked-room mystery Uncle Silas, the lesbian vampire novella Carmilla, and the historical novel The House by the Churchyard.
Read more or edit on Wikipedia