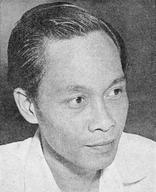 Pramoedya Ananta Toer (EYD: Pramudya Ananta Tur) (6 February 1925 – 30 April 2006) was an Indonesian author of novels, short stories, essays, polemics and histories of his homeland and its people. His works span the colonial period under Dutch rule, Indonesia's struggle for independence, its occupation by Japan during the Second World War, as well as the post-colonial authoritarian regimes of Sukarno and Suharto, and are infused with personal and national history. Pramoedya's writings sometimes fell out of favour with the colonial and later the authoritarian native governments in power. He faced censorship in Indonesia during the pre-Reformasi era even though he was well-known outside Indonesia. Dutch authorities imprisoned him from 1947 to 1949 during the War of Independence. During the transition to the Suharto regime, he was caught up in the shifting tides of political change and power struggles. Suharto had him imprisoned from 1969 to 1979 on the Maluku island of Buru and branded him a Communist. He was seen as a holdover from the previous regime, despite having struggled with it. It was on the Island of Buru that he composed his most famous work, the Buru Quartet. Not permitted access to writing materials, he recited the story orally to other prisoners before it was written down and smuggled out. Pramoedya opposed some policies of founding President Sukarno as well as the New Order regime of Suharto, Sukarno's successor. Political criticisms were often subtle in his writing, although he was outspoken against colonialism, racism and corruption of the Indonesian new government. During the many years in which he suffered imprisonment and house arrest (in Jakarta after his imprisonment on Buru), he became a cause célèbre for advocates of human rights and freedom of expression. Source: Wikipedia (en)