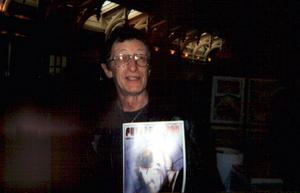 Alan Grant (born 1949) is a Scottish comic book writer known for writing Judge Dredd in 2000 AD as well as various Batman titles from the late 1980s to the early 2000s. He is the co-creator of the characters Anarky, Victor Zsasz, and the Ventriloquist.
Read more or edit on Wikipedia