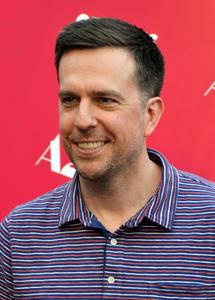 Edward Parker Helms (born January 24, 1974) is an American actor, comedian, singer, writer, and producer. From 2002 to 2006 he was a correspondent on Comedy Central's The Daily Show with Jon Stewart. He then played paper salesman Andy Bernard in the NBC sitcom The Office (2006–2013), and starred as Stuart Price in The Hangover trilogy. He currently stars in the comedy series Rutherford Falls (2021–present). Helms has also starred in dramatic films and comedic films such as Cedar Rapids, Jeff Who Lives at Home (both 2011), We're the Millers (2013), Vacation (2015), Chappaquiddick (2017), A Futile and Stupid Gesture, Tag (both 2018) and Together Together (2021). He provided the voice to the animated films, Monsters vs. Aliens (2009), The Lorax (2012) and played the title role in Captain Underpants: The First Epic Movie (2017). He has received six Screen Actors Guild Award nominations for Outstanding Performance by an Ensemble in a Comedy Series winning in 2008. He also received a Writers Guild of America Award for Best Writing for a Comedy or Variety Special for The Fake News with Ted Nelms (2018).
Read more or edit on Wikipedia