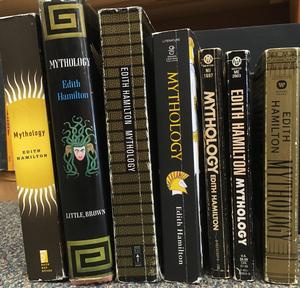 Mythology: Timeless Tales of Gods and Heroes is a book written by Edith Hamilton, published in 1942 by Little, Brown and Company. It has been reissued since then by several publishers, including its 75th anniversary illustrated edition. It retells stories of Greek, Roman, and Norse mythology drawn from a variety of sources. The introduction includes commentary on the major classical poets used as sources, and on how changing cultures have led to changing characterizations of the deities and their myths. It is frequently used in high schools and colleges as an introductory text to ancient mythology and belief.
Read more or edit on Wikipedia