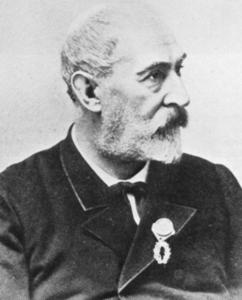 Marcos Jiménez de la Espada (1831–1898) was a Spanish zoologist, herpetologist, explorer and writer, born in Cartagena, Spain, although he spent most of his life in Madrid, where he died. He is known for participating in the Pacific Scientific Commission, with whom he traveled America from 1862 to 1865. He also published several works on geography and history of the American continent.
Read more or edit on Wikipedia