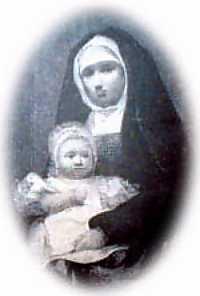 Maria Monk (June 27, 1816 – summer of 1849) was a Canadian woman whose book Awful Disclosures of Maria Monk, or, The Hidden Secrets of a Nun’s Life in a Convent Exposed (1836) claimed to expose systematic sexual abuse of nuns and infanticide of the resulting children by Catholic priests in her convent in Montreal. The book is considered by scholars to be an anti-Catholic hoax. Awful Disclosures of Maria Monk was published in January 1836. In it, Monk claimed that nuns of the Religious Hospitallers of St. Joseph of the Montreal convent of the Hôtel-Dieu, whom she called "the Black Nuns", were forced to have sex with the priests in the seminary next door. The priests supposedly entered the convent through a secret tunnel. If the sexual union produced a baby, it was baptized and then strangled and dumped into a lime pit in the basement. Uncooperative nuns disappeared. Monk's story contains various inconsistencies. In her account, she stated that there were three convents in Montreal: "1st. The Congregational Nunnery. 2d. The Black Nunnery, or Convent of Sister Bourgeoise. 3d The Grey Nunnery." The Congregational Nuns were the Congregation of Notre Dame of Montreal, founded by Marguerite Bourgeoys, not the Sisters of Charity, as Monk stated at the beginning of her text; the Religious Hospitallers of St. Joseph, whose habits were black but who were not typically called "Black Nuns", operated the Hotel-Dieu, where Monk claimed that she entered and suffered, and it was not founded by "Sister Bourgeoise [sic]"; and it was the Sisters of Charity who were commonly known as the Grey Nuns. It is known that Monk lived in an asylum in her early years and that one of the nuns mentioned in her story was actually a fellow patient in the asylum. There is some evidence that Maria Monk had suffered a brain injury as a child. One possible result of this alleged injury could be that Monk might have been manipulated, and might not be able to distinguish between fact and fantasy. Another possible result of the alleged injury could be that Monk had little understanding of the devastating result of her claims. It has been suggested, though not proven, that Monk was manipulated into playing a role for profit by her publisher or her ghost writers. Scholars consider the book a hoax.
Read more or edit on Wikipedia