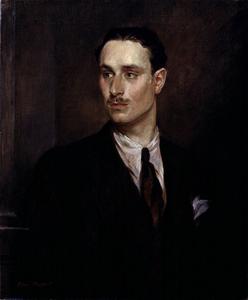 Sir Oswald Ernald Mosley, 6th Baronet (16 November 1896 – 3 December 1980) was a British politician during the 1920s and 1930s who rose to fame when, having become disillusioned with mainstream politics, he turned to fascism. He was a member of parliament and later founded and led the British Union of Fascists (BUF).After military service during the First World War, Mosley was one of the youngest members of parliament, representing Harrow from 1918 to 1924, first as a Conservative, then an independent, before joining the Labour Party. At the 1924 general election he stood in Birmingham Ladywood against the future prime minister, Neville Chamberlain, coming within 100 votes of defeating him. Mosley returned to Parliament as Labour MP for Smethwick at a by-election in 1926 and served as Chancellor of the Duchy of Lancaster in the Labour Government of 1929–31. In 1928, he succeeded his father as the sixth Mosley baronet, a title that had been in his family for more than a century. He was considered a potential Labour Prime Minister but resigned because of discord with the government's unemployment policies. He chose not to defend his Smethwick constituency at the 1931 general election, instead unsuccessfully standing in Stoke-on-Trent. Mosley's New Party became the British Union of Fascists (BUF) in 1932. Mosley was imprisoned in May 1940 and the BUF was banned. He was released in 1943 and, politically disgraced by his association with fascism, moved abroad in 1951, spending most of the remainder of his life in Paris and two residences in Ireland. He stood for Parliament during the post-war era but received very little support. During this latter period he was an advocate of pro-European integration.
Read more or edit on Wikipedia