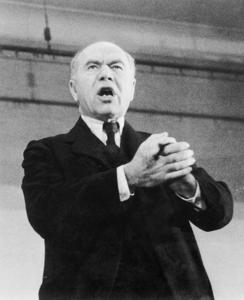 William Maxwell Aitken, 1st Baron Beaverbrook, PC, ONB (25 May 1879 – 9 June 1964), generally known as Lord Beaverbrook, was a Canadian-British newspaper publisher and backstage politician who was an influential figure in British media and politics of the first half of the 20th century. His base of power was the largest circulation newspaper in the world, the Daily Express, which appealed to the conservative working class with intensely patriotic news and editorials. During the Second World War, he played a major role in mobilising industrial resources as Winston Churchill's Minister of Aircraft Production.The young Max Aitken had a gift for making money and was a millionaire by 30. His business ambitions quickly exceeded opportunities in Canada and he moved to Britain. There he befriended Bonar Law and with his support won a seat in the House of Commons at the December 1910 United Kingdom general election. A knighthood followed shortly after. During the First World War he ran the Canadian Records office in London, and played a role in the removal of H. H. Asquith as prime minister in 1916. The resulting coalition government (with David Lloyd George as prime minister and Bonar Law as Chancellor of the Exchequer) rewarded Aitken with a peerage and, briefly, a Cabinet post as Minister of Information. After the war, the now Lord Beaverbrook concentrated on his business interests. He built the Daily Express into the most successful mass-circulation newspaper in the world, with sales of 2.25 million copies a day across Britain. He used it to pursue personal campaigns, most notably for tariff reform and for the British Empire to become a free trade bloc. Beaverbrook supported the governments of Stanley Baldwin and Neville Chamberlain throughout the 1930s and was persuaded by another long-standing political friend, Winston Churchill, to serve as his Minister of Aircraft Production from May 1940. Churchill and others later praised his ministerial contributions. He resigned due to ill-health in 1941 but later in the war was appointed Lord Privy Seal. Beaverbrook spent his later life running his newspapers, which by then included the Evening Standard and the Sunday Express. He served as Chancellor of the University of New Brunswick and developed a reputation as a historian with his books on political and military history.
Read more or edit on Wikipedia