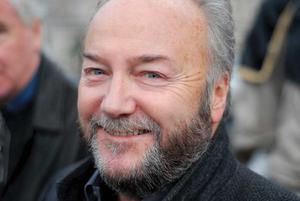 George Galloway (born 16 August 1954) is a British politician, broadcaster and writer. Between 1987 and 2015, except for a period between 2010 and 2012, he was a Member of Parliament (MP) for four constituencies, firstly for the Labour Party and later the Respect Party. Galloway was born in Dundee to a Scottish father and Irish mother. After becoming the youngest ever chair of the Scottish Labour Party in 1981, he was general secretary of the London-based charity War on Want from 1983 until elected as MP for Glasgow Hillhead (later Glasgow Kelvin) at the 1987 general election. In 2003, Galloway was expelled from the Labour Party for bringing the party into disrepute, including having called on Arabs to fight British troops.In 2004, he became a member of Respect–The Unity Coalition, later known as the Respect Party, becoming party leader by late 2013. Having decided not to seek re-election for Glasgow Kelvin, he stood for Respect in the 2005 general election for Bethnal Green and Bow, defeating the sitting Labour MP, Oona King, and served for one parliamentary term. He did not fight the 2010 General Election and returned to the House of Commons at the Bradford West by-election in 2012, but lost his seat at the 2015 general election. Galloway stood as a Respect candidate in the 2016 London mayoral election, but lost to the Labour nominee, Sadiq Khan; finishing in seventh place with 1.4% of the vote. He stood as an independent candidate for Manchester Gorton in 2017 and for West Bromwich East in 2019. Following the 2019 general election, he founded the Workers Party of Britain. Galloway was initially an opponent of Saddam Hussein, but has been accused by David Aaronovitch and Christopher Hitchens of supporting the Iraqi leader when it became Western policy not to, a charge he denies. Galloway testified to the United States Senate in 2005 over alleged illicit payments from the United Nations' Oil for Food Program. Galloway supports the Palestinian side in the Israeli–Palestinian conflict, opposes Zionism, and was involved in the Viva Palestina aid convoys. Galloway supported Jeremy Corbyn in the 2015 Labour Party leadership election and during Corbyn's leadership of the party. In the 2016 EU membership referendum, he advocated a "Leave" vote, campaigning with the cross-party, pro-Brexit organisation Grassroots Out, while before the 2019 European Parliament election he announced on Twitter, "for one-time only", he would support Nigel Farage's Brexit Party.
Read more or edit on Wikipedia

I'm Not the Only One