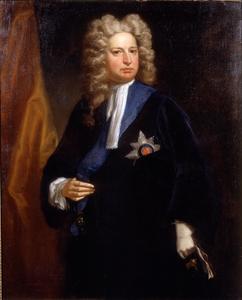 Robert Harley, 1st Earl of Oxford and Earl Mortimer, KG PC FRS (5 December 1661 – 21 May 1724) was an English and later British statesman of the late Stuart and early Georgian periods. He began his career as a Whig, before defecting to a new Tory Ministry. He was raised to the peerage of Great Britain as an earl in 1711. Between 1711 and 1714 he served as Lord High Treasurer, effectively Queen Anne's chief minister. He has been called a Prime Minister, although it is generally accepted that the de facto first minister to be a prime minister was Robert Walpole in 1721. The central achievement of Harley's government was the negotiation of the Treaty of Utrecht with France in 1713, which brought an end to twelve years of English and Scottish involvement in the War of the Spanish Succession. In 1714 Harley fell from favour following the accession of the first monarch of the House of Hanover, George I, and was for a time imprisoned in the Tower of London by his political enemies. He was also a noted literary figure and served as a patron of both the October Club and the Scriblerus Club. Harley Street is sometimes said to be named after him, although it was his son Edward Harley who actually developed the area.
Read more or edit on Wikipedia