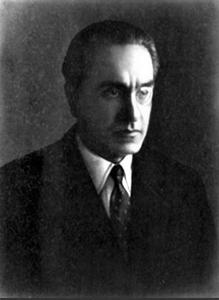 Giulio Cesare Andrea Evola (Italian: [ˈɛːvola]; 19 May 1898 – 11 June 1974), better known as Julius Evola, was an Italian philosopher, poet, and painter who has been described as a "fascist intellectual", a "radical traditionalist", "antiegalitarian, antiliberal, antidemocratic, and antipopular", and as "the leading philosopher of Europe's neofascist movement". His esoteric worldview featured antisemitic conspiracy theories and the occult. Evola is popular in fringe circles, largely because of his metaphysical, magical, and supernatural beliefs – including belief in ghosts, telepathy, and alchemy – and his traditionalism. He termed his philosophy "magical idealism". Many of Evola's theories and writings were centered on his hostility toward Christianity and his idiosyncratic mysticism, occultism, and esoteric religious studies, and this aspect of his work has influenced occultists and esotericists. Evola also justified male domination over women as part of a purely patriarchal society, an outlook stemming from his traditionalist views on gender, which demanded women stay in or revert to what he saw as their traditional gender roles, where they were completely subordinate to male authority.According to the scholar Franco Ferraresi, "Evola's doctrine can be considered as one of the most radical, consistent, rigorous expressions of anti-equalitarian, anti-liberal, anti-democratic and anti-popular thought in the twentieth century". It is a singular, though not necessarily original, blend of several schools and traditions, including German idealism, Eastern doctrines, traditionalism, and the all-embracing Weltanschauung of the interwar conservative revolutionary movement with which Evola had a deep personal involvement. Historian Aaron Gillette described Evola as "one of the most influential fascist racists in Italian history".Evola admired SS head Reichsführer Heinrich Himmler, whom he once met. Autobiographical remarks by Evola allude to his having worked for the Sicherheitsdienst, or SD, the intelligence agency of the SS and the Nazi Party. During his trial in 1951, Evola denied being a fascist and instead referred to himself as "superfascista" (lit. 'superfascist'). Concerning this statement, historian Elisabetta Cassina Wolff wrote that "It is unclear whether this meant that Evola was placing himself above or beyond Fascism".Evola has been called the "chief ideologue" of Italy's radical right after World War II. He continues to influence contemporary traditionalist and neo-fascist movements.
Read more or edit on Wikipedia