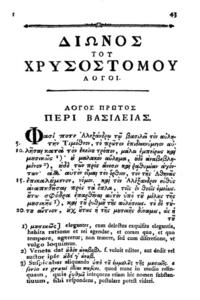 Dio Chrysostom (; Greek: Δίων Χρυσόστομος Dion Chrysostomos), Dion of Prusa or Cocceianus Dio (c. 40 – c. 115 AD), was a Greek orator, writer, philosopher and historian of the Roman Empire in the 1st century AD. Eighty of his Discourses (or Orations; Λόγοι) are extant, as well as a few Letters and a mock essay "In Praise of Hair", as well as a few other fragments. His sobriquet Chrysostom comes from the Greek chrysostomos (χρυσόστομος), which literally means "golden-mouthed".
Read more or edit on Wikipedia