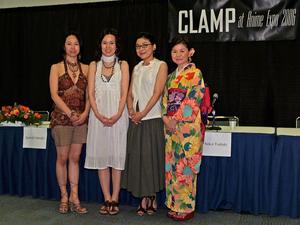 Clamp (stylized as CLAMP) is an all-female Japanese manga artist group, consisting of leader and writer Nanase Ohkawa (born in Osaka), and three artists whose roles shift for each series: Mokona, Tsubaki Nekoi, and Satsuki Igarashi (all born in Kyoto). Clamp was first formed in the mid-1980s as an eleven-member group creating dōjinshi (self-published fan works), and began creating original manga in 1987. By the time the group made its mainstream publishing debut with RG Veda in 1989, it was reduced to seven members; three more members left in 1993, leaving the four current members of the group. Notable works by Clamp include X (1992), Magic Knight Rayearth (1993), Cardcaptor Sakura (1996) and its sequel Cardcaptor Sakura: Clear Card (2016), Chobits (2000), and xxxHolic and Tsubasa: Reservoir Chronicle (both 2003). Various series by the group cross-reference each other, and characters reappear in multiple works by the group, with Tsubasa, a series set across multiple dimensions, featuring multiple alternative versions of characters from past works. Clamp are noted as among the most critically and commercially acclaimed manga artists in Japan, and as of 2007, have sold nearly 100 million books worldwide.
Read more or edit on Wikipedia