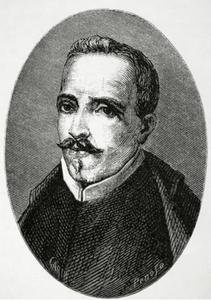 Inca Garcilaso de la Vega (12 April 1539 – 23 April 1616), born Gómez Suárez de Figueroa and known as El Inca, was a chronicler and writer born in the Viceroyalty of Peru. He is considered the earliest-recorded mestizo in the history of the Americas. Sailing to Spain at 21, he was educated informally there, where he lived and worked the rest of his life. The natural son of a Spanish conquistador and an Inca noblewoman born in the early years of the conquest, he is known primarily for his chronicles of Inca history, culture, and society. His work was widely read in Europe, influential and well received. It was the first literature by an author born in the Americas to enter the western canon.After his father's death in 1559, Vega moved to Spain in 1561, seeking official acknowledgement as his father's son. His paternal uncle became a protector, and he lived in Spain for the rest of his life, where he wrote his histories of the Inca culture and Spanish conquest, as well as an account of De Soto's expedition in Florida.
Read more or edit on Wikipedia