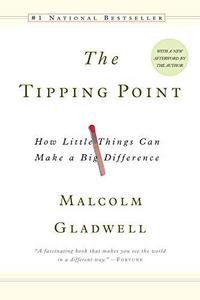 The Tipping Point: How Little Things Can Make a Big Difference is the debut book by Malcolm Gladwell, first published by Little, Brown in 2000. Gladwell defines a tipping point as "the moment of critical mass, the threshold, the boiling point". The book seeks to explain and describe the "mysterious" sociological changes that mark everyday life. As Gladwell states: "Ideas and products and messages and behaviors spread like viruses do". The examples of such changes in his book include the rise in popularity and sales of Hush Puppies shoes in the mid-1990s and the steep drop in New York City's crime rate after 1990.
Read more or edit on Wikipedia