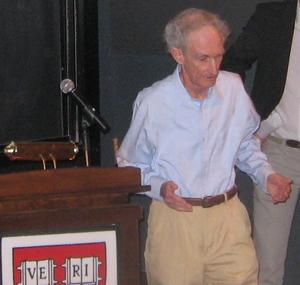 Robert May, Baron May of Oxford

Robert McCredie May, Baron May of Oxford, HonFAIB (8 January 1936 – 28 April 2020) was an Australian scientist who was Chief Scientific Adviser to the UK Government, President of the Royal Society, and a professor at the University of Sydney and Princeton University. He held joint professorships at the University of Oxford and Imperial College London. He was also a crossbench member of the House of Lords from 2001 until his retirement in 2017. May was a Fellow of Merton College, Oxford, and an appointed member of the council of the British Science Association. He was also a member of the advisory council for the Campaign for Science and Engineering.
Read more or edit on Wikipedia