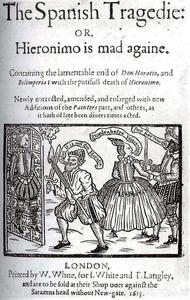 Thomas Kyd (baptised 6 November 1558; buried 15 August 1594) was an English playwright, the author of The Spanish Tragedy, and one of the most important figures in the development of Elizabethan drama. Although well known in his own time, Kyd fell into obscurity until 1773 when Thomas Hawkins, an early editor of The Spanish Tragedy, discovered that Kyd was named as its author by Thomas Heywood in his Apologie for Actors (1612). A hundred years later, scholars in Germany and England began to shed light on his life and work, including the controversial finding that he may have been the author of a Hamlet play pre-dating Shakespeare's, which is now known as the Ur-Hamlet.
Read more or edit on Wikipedia