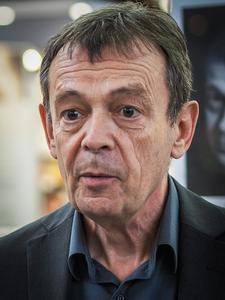 Pierre Lemaitre (born 19 April 1951) is a Prix Goncourt-winning French author and a screenwriter, internationally renowned for the crime novels featuring the fictional character Commandant Camille Verhœven. His first novel to be translated into English, Alex, is a translation of the French book of the same title, it jointly won the CWA International Dagger for best translated crime novel of 2013.In November 2013, he was awarded the Prix Goncourt, France's top literary prize, for Au revoir là-haut (published in English as The Great Swindle), an epic about World War I. His novels Camille and The Great Swindle won the CWA International Dagger in 2015 and 2016 respectively.
Read more or edit on Wikipedia